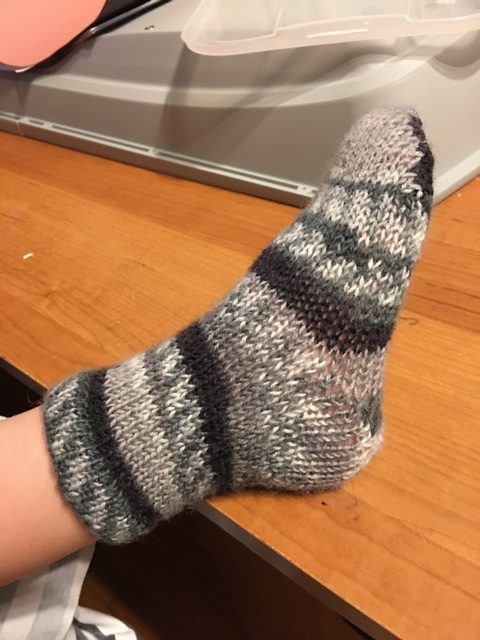 If she knew I called her a toddler, I would not be in her good graces. She’s three and was only too happy to put that sock on and whip her foot up on the kitchen table!

If you’re a socktv fan and you happened to catch the 2019 black Friday episode, you caught me with my pants down! Not literally…I mean really…what were you thinking? The weekend prior to Thanksgiving is Sue’s annual Show Me Your Socks Crank-In and at that event my friend Teri saw me start a ribbed sock and claimed she had never seen it before. She was heading out the door soon so she didn’t want me to teach it to her right then, but I promised I would do it on the next socktv.

So, the very next Friday….BLACK Friday if you will, I packed up and went to Ron’s studio fully prepared to show how to start a ribbed sock. With examples already made and an iron to show how to finish the top of the sock so it’s nice and tight. I even remembered that Joyce couldn’t make it because she had to work. Even though he was previously fired from the job of telephone at socktv, I convinced Jeff to try it one more time. The only thing that I might have forgotten was the ribber. Pretty important when you are showing how to start a ribbed sock…

So, we arrive in plenty of time to get set up, situated and organized. Ron and Jeff always have a lot to talk about, but we got that out of the way and I cast on and was getting ready to go when I realized that I couldn’t find the ribber in the box. It was 8:58. I think I might have dropped the F bomb, because I didn’t have enough cylinder needles with me to fill the cylinder (I had at least 100 ribber needles along).

My mind was racing and so was my heart. But on the fly and as that beautiful computer music started rolling, I decided to make a sock with every other needle. It was a 72 cylinder and set up for normal sock tension. I would call it a toddler sock.

So, I opened the show…Jeff is keeping up with the shout outs, though, they were coming in at a pretty quick rate, changed to project yarn, cranked about 18 rows and hung a hem. Then I cranked 25 rows and began to make a heel, I added an extra needle on each side to make a deep heel and that’s when the fun began. The heel spring decided it didn’t want to work. I was dealing with that when it was time to install some sort of downward pressure…you know, like heel forks or a v hook. Guess what!?!? That was at home too! I made it through the heel and cranked about 20 rows and made the toe. I got if off the machine (miracles never cease) and delivered the news that all sock gremlins were at my house so the whole world should not have dropped a single stitch for the rest of the day Friday!

With all that being said, I came home and closed the toe. Then I washed and dried that little sucker and Joyce took it to her granddaughter’s house. It fit! She liked it! Joyce said it had a little problem at the toe, but that’s no surprise if you saw me make the sock!

At the end of the episode, I claimed that the sock (though the tension looked hideous) would be fine with a little wash and dry action and that I would show the sock off…so here it is. I didn’t take a before picture and I am sorry for that.

Moral of the story? Never, ever judge a mock rib sock until it’s been washed my friends.

Until next time, I hope the sock gremlins can’t find your house. Well, actually, I hope those gremlins at socktv on Friday took a long walk off of a short bridge!