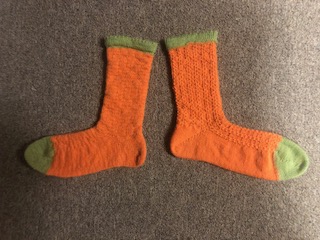 So, here’s a beginner friendly pattern for a pair of pumpkin socks~made with moss green and orange yarn. It’s a version of a tuck stitch where you don’t remove needles in the cylinder. My sample pictures were made on a 60 cylinder, so if you are going to make them on a different cylinder, you will need to adjust your marked needles….

Let me describe what I did. There is a companion video on Socktv, but you must be a subscriber to watch older Socktv videos. I think with these pictures and this description of what I did, you will be able to be making pumpkin socks too….

First off, I got a bottle of fingernail polish and put a dot of it on every 5th needle. (because 5 divides into 60, but let’s say you are doing it on a 72 cylinder, you would need to mark every 6th needle. Or on a 64 you would mark every 8th needle…this is the drawback of a 64 cylinder, it doesn’t divide by much) . Don’t make this harder than it really is. (a common problem amongst pattern readers). Start at needle number 1 and count to 6. put a small dot of polish on needle number 6. the next needle would be number one again and put a dot on number 6. Do this all the way around the cylinder and let the polish dry.

Cast onto machine with waste yarn. Change to green project yarn, crank 10 rows, do a picot row, then crank 10 rows. Hang the hem. After the hem is hung, and a row is cranked, stop at 6 o’clock (again, don’t split hairs in pattern reading here. Just get yourself a hung hem and get to 6 o’clock. Remember how you did it so you can do it the same on the second sock.

When you come to the place where you would begin preheel operations, only work the pattern on the back half of the needles. Continue for your predetermined number of heel rows.

Continue with the pattern down the top of the foot (leaving the bottom of the foot as a stockenette stitch so it’s more comfortable to walk upon).

When you reach the place where you want the toe, do a russian join and change back to green yarn. If the sock needs two more rows to be the perfect length, it is ok to do them in green. Be sure there is at least one row of stockinette stitch all the way around the sock and crank the toe.

Now, here’s a shorty sock (the one I made on Socktv) that I made as a footie. I think it’s pretty darn cute, but that green toe sure makes my toes look pointy!!

Also, to show the pattern more clearly, you may want to turn the sock inside out. It’s all up to you….you decide!!