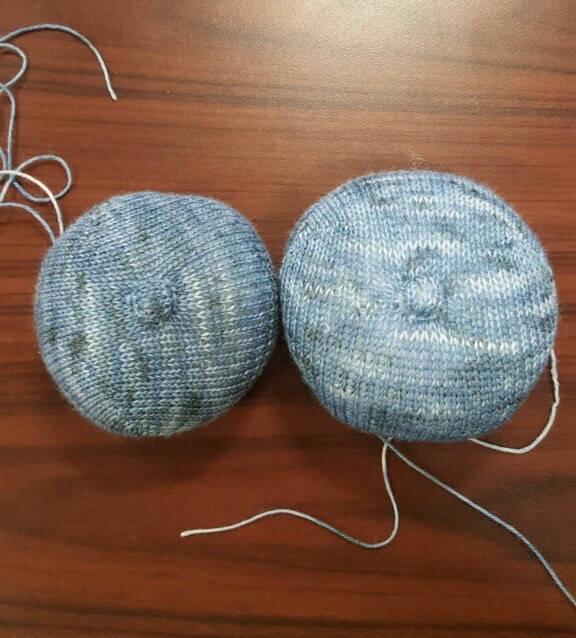 So, just about any place you find a group of knitters, you always find a group that’s knitting for a cause. Do you think it started in WW1 when the troops needed socks? I don’t know, but it sounds good. So, a long time ago I read an article in a magazine about a lady near Springfield, Missouri that was making Knitted Knockers and making them available to women who needed them. I did a little research and found this pattern. http://knitty.com/ISSUEfall05/PATTbits.html At the time, it was the only pattern…now there are several organizations, patterns and countless knitting groups who create these wonderfully useful boobs! www,knittedknockers.org seems to be the largest one.

Back to my quest…It looked to me like something that could be made on the circular knitting machine. So I gave it a try. I came up with a semblance of one on the machine. Basically, I made a toe up toe then knit a few rows then made another toe, that I Kitchenered closed. It was a pretty good likeness. I showed them to some people and greatly offended a dear friend who thought I was joking about the whole boob thing. I felt terrible. I shelved the project because I didn’t even know if it would work like it should. Several years later, we got to talking about it at a crank in. There was a woman there who admitted to wearing a prostethic breast! I summoned my courage and asked her to try one (I had to sit down and make it on the spot). She happliy installed it and wore it for the whole day! She reported that it was very comfortable, did the job and that it was much cooler than her silicone one. I was thrilled…thinking that finally, my pattern would take off. It didn’t.

So, last year our friend Mike Yeomans lost his wife Nancy to metastatic breast cancer. She lived a wonderful life and boldly discussed her disease with anyone who cared to. Mike made gazillions of Chemo Caps on the Bumblebee and gave them to the place where Nancy got her chemo. He reported that his caps were the first ones snatched up by the bald patients, as his hats were made from merino/bamboo and approved by Nancy’s sensitive head. After so many chemo caps, one gets tired of the same old thing. So Mike mentioned to Sue and Sue told him that I had a breast pattern. He asked me about it at the November crank in and I told him what to do. He looked at me like I was speaking a foreign language because he doesn’t do toe ups. So…I revamped my pattern and sent it to him. He told Sue what to do to make one and she gave it a whirl, making some changes. And ta-da! Here’s the pattern!! https://csmsupplies.com/store/patterns/csm-knitted-prosthetic-breast/

You can download it for free~you can give it a try~you can maybe make someone’s day when it’s just not very cheery for that person~the sky is the limit here! Go out and do something for someone else and see how your life is blessed.

as always, happy knitting my friends!