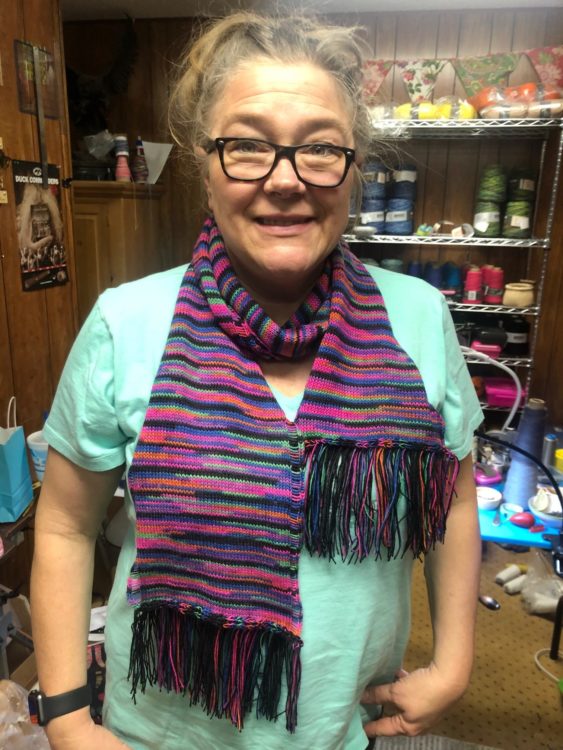 The bad part about this blog is that most of the time, I only have myself as the model! So you just have to get used to seeing me in my latest creation…sorry about that. Nothing like putting the disclaimer up front!

So, I showed everyone how to make flat fabric using all of the needles on Socktv. (look up socktv.tv if you are not a subscriber*) The fabric here was made on a 54 cylinder with the loosest tension I could manage and still knit. I have found that anything going around your head or neck needs to be at a much looser tension than a sock or it will feel like you are being strangled. That’s my personal observation and you must consider that I am in my mid50’s so hot flashes are a real thing for me at this lifestage! So, you may find that you like a tighter tension and that’s ok. Always, always and most of the time, I show you how I do it and you take the information and do it the way that’s best for you, ok?

I am going to attempt to describe how to do flat fabric using all of the needles on a circular knitting machine with words here. People learn all sorts of ways, and so if you are a read a book learner, this is for you.

PRACTICE THIS BEFORE YOU START A PROJECT!!! READ ALL INSTRUCTIONS BEFORE ATTEMPTING FLAT FABRIC. TAKE MY ADVICE, i DID NOT USE IT!

Before I tell you how to do it, we’re going to establish a couple of things. When I say “raise needles” in these instructions, you will use your crescent and raise the needles the width of the crescent, plus two or three needles. When I say “lower needles” you will lower the raised needles down, but not all the way down and make darn sure all latches are open. These two steps are vitally important to understand in order to make this project work for you. You raise enough needles so that the cranking can be reversed, just like on a heel…if you don’t go far enough, the machine will jam when you try to go the other direction. Now, lowering needles is easy when you know how to do it….if you push them down too far, the latch will begin to close and your stitches will drop and run like old lady pantyhose.

Now as far as making this scarf, I knew that I wanted to to touch the floor then come back up to be even with the machine. In hindsite, I would have made it a little longer.

There should be at least 2 inches of waste yarn at the top and the bottom of the scarf. There is no selvedge on either end of the scarf, the fringe will make the selvedge.